The 2021 Fall Sports Season in a Nutshell

The Oaks Academy Plus offers our students a variety of extracurricular activities such as before and after care, clubs, and sports. Sports, in particular, provide students with a different atmosphere to learn and grow where they face new and different challenges.

The Oaks is one of 13 schools in the Indianapolis Independent School League (IISL), in which our Junior Varsity and Varsity Teams play. In addition to these teams, Oaks Plus follows a ‘no-cut’ philosophy that allows for every student who wants to play a sport to be on a team. Tryouts are held so that coaches can assess the skills and abilities of players and assign them to an appropriately challenging conference or in-house team. In-house teams compete in an intramural league where they may often play against one of the other Oaks in-house teams.

One of the focuses for the soccer program this season was to acclimate new and returning student-athletes to the pitch (soccer field), while also building and nurturing their skills and talents so everyone was able to compete to the best of their ability. Turnout was impressive, with 5 teams and over 50 students participating.

The Oaks soccer lineup included 3 in-house teams: Green, Maroon, and White that were never at a loss for competition. While teams faced many opponents in the intramural league, coaches stated that there was a stronger air of competition when facing off against another in-house team.

Coming off the heels of the 2020 season that saw the cross country teams only engage in in-house competitions due to COVID-19, the 2021 season was able to have meets with other teams in the IISL. Welcoming 20 students to the team this season, many who had never run competitively before, the aim of this season was to get those new runners ready and in a place to have fun while working hard.

Different from many other sports teams, it is the responsibility of the student to keep track of their personal best times and compare that to their performance at each meet. Coaches remained at the ready with guidance and training advice to ensure the students could enjoy learning and competing to the best of their ability. As part of a combined 200 runners participating in the IISL championship meet, our boys team placed 4th and our girls team placed 3rd, with 3 runners qualifying for and participating in the state meet in Terre Haute!

Rivaling the soccer program in number of teams, the volleyball program consisted of 3 in-house teams along with the 2 conference teams. The coaches and players on the in-house teams made the most of their season as they gained skills, learned about the game, and got excited about the opportunity to return next year to a stronger program and hopeful placement on a conference team.

The JV and Varsity teams experienced a rocky start to their competitive season, but found improvement as they progressed through their seasons by pushing and encouraging each other in their joint practices. With both teams earning a mid-level seed for the IISL conference championship, the JV team lost in the second round while the Varsity team played through to the final game where they brought home the runner-up title and trophy.

After a successful fall season, Oaks Athletics is back with our winter team sports of boy’s and girl’s basketball and encourage you to come out to support and encourage our young student-athletes as they compete against each other and schools in the IISL. To see a schedule of games, please visit the Oaks Plus calendar. 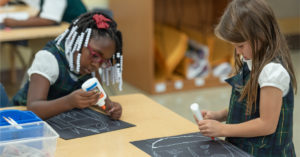 The Oaks Academy has a unique and rich arts program that is integrated into our student’s curriculum, meaning every activity that students do is connected to what they are learning in the classroom. 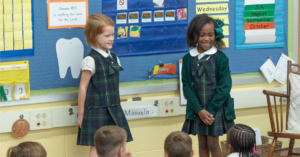 A Day in the Life of a Kindergarten Class

Join us as we walk through what a day in the life of a kindergarten class looks like at The Oaks Academy! 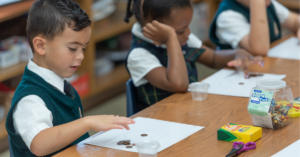 3 Things to Know About Financial Aid at The Oaks Academy​

With a commitment to diversity that includes families from all socioeconomic backgrounds, we understand how important this part of the school decision process can be for our families. That’s why we’re answering the most common questions about financial aid.